As North Florida’s winter gloom settled on Gainesville, freshman Irma Velez became deeply homesick for her native Miami. “In Miami, it is always warm and colorful,” reflected Velez, who was living in Hume Hall and studying zoology in the 1970s. “I really wanted to go home.”

However, one day, Velez was riding her bike around campus and came upon Wilmot Gardens with its camellias in full bloom. Right away, she knew she had found a colorful respite and sanctuary.

“I was going through a hard time and I found a refuge here in the garden, a refuge place in winter. It was the color that kept me here,” said Velez.

In particular, it was the camellias that drew her attention – their vibrant colors when most other vegetation is dormant. Now, decades later, Velez is considered Wilmot Gardens’ resident camellia expert. She has identified many of the camellia varieties and prunes, fertilizes and maintains them weekly during volunteer sessions.

Her affection for the gardens stems in part from their shared history. Not only did Velez visit often as a student, soaking up the foliage and brilliant colors, but she was also married in Wilmot Gardens in 1974.

It was not until one day when Velez and her husband wanted to share a picnic that they became aware of how neglected and overgrown the gardens had become. The couple could not even find a place to sit and eat and ended up eating in their car. “It saddened me, but it also inspired me,” said Velez of that afternoon outing. “I wanted to try to find someone to fix it.”

In 2006, Velez connected with a group of volunteers, led by C. Craig Tisher, M.D., and Linda Luecking, who were also interested in restoring and rejuvenating the gardens from years of neglect and damages, including a southern pine beetle infestation, overgrowth of invasive vines, and hurricane devastation. The group would pick a spot and clean up the area, using machetes to cut down the overgrowth.  Little by little, the gardens started to reemerge. 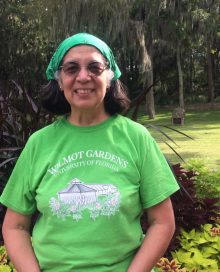 “For me, the biggest milestone was Wilmot Gardens being designated as a UF historical site,” said Velez, who has seen the gardens’ footprint gradually shrink over the years from encroaching construction projects. “Once you got that done, you could feel like the gardens weren’t going anywhere. No one was going to take it away from us.”

Eventually, the group realized the act of restoring the gardens was having a positive and widespread effect on the UF health campus and beyond. Eventually, the mission of Wilmot Gardens was expanded to not only preserve the historic site, but to serve as a living laboratory dedicated to improving people’s quality of life through patient care, education and research. Today, thanks largely in part to the continued efforts of Velez, patients and visitors of the surrounding health care facilities find refuge in the greenspace, similar to that which Velez herself experienced as a freshman.

As for Velez, her weekly workdays at the gardens are still therapeutic. “Getting into the garden and the dirt, just focusing on planting things and watching them grow leaves me feeling really good,” she said. “I can see it providing therapy for families and patients who walk around the gardens. They appreciate it for being there for them. I hope that it can be maintained as a healing garden, an island of refuge that people continue to enjoy.”

Click here to get back to the full Newsletter.