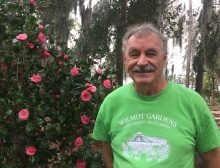 In the 1970s, John Maruniak was enrolled as an undergraduate student at the University of Florida studying fine arts. During this time, John occasionally visited Wilmot Gardens with friends and dates during the blooming season and recollects the gardens were “pristine, beautiful and well-kept.” However, in the summer of his junior year, John’s studies were abruptly interrupted. Drafted for the Vietnam War, he found himself relocated to New Mexico.

No longer living in Florida after the war, John went on to complete his studies in fine arts at the University of New Mexico and received his master’s degree in Urban and Regional Planning from the University of Colorado. It wasn’t until 1990 that John returned to Gainesville, to serve as the University Planner for the University of Florida. It was in this position that he found himself reintroduced to Wilmot Gardens while developing a master plan for the campus. John visited Wilmot Gardens as a potential site for a conservation area on campus, but by this time the gardens had been disregarded and the paths were blocked with debris from tree damage caused by pests, lightning and drought. John recalls that although these deterrents were in place, people still frequented the site and Wilmot Gardens was identified in the plan as a conservation area. While no major proposals for restoration were established at that time, work was completed to clear the overgrown paths and make the area safer for people visiting the site.

Over a decade later, John recollects driving by the gardens one day and seeing orange ribbons and barricades. Curious, he stopped to ask someone what was happening and was told that the gardens were going to be restored. Upon hearing this news, he made connection with the volunteer group interested in restoring and rejuvenating the gardens, led by C. Craig Tisher, M.D. “At that time access was the big initial goal,” John reminisced about the early days of the restoration. “Volunteer days were big, all-day events with a lot of incredible work. Two roll-off dumpsters were on site and every time both would be full after the work was done.” He attributes the major changes at Wilmot Gardens to the College of Medicine taking ownership of the land and being dedicated to improvement of the gardens, as well as to the expansion of the mission to include patient care, education and research. “It always had a role for student education. Then the decision to become a research base changed the role of Wilmot Gardens in the community,” said John.

Although most of the restoration is now complete, John still volunteers each Tuesday and every volunteer workday. He now assists with leading large groups of student volunteers to maintain and enhance the gardens. “I enjoy working with volunteers because of their attitude, physical strength, stamina, and motivation,” said John. It is the nature of the work and the people that he most enjoys about working in the gardens. John’s specialty is stump removal and he has trained many volunteers on using an axe and other methods for eradication. Resulting from the tree damage that occurred, there are many stumps remaining on site and John views their elimination as a means to clear the area for other uses. Little by little, stump by stump, progress continues to be made.

John’s hope for the future of Wilmot Gardens is that “it becomes a vibrant, self-sustaining location that serves the community as well as the university and that more and more people learn about it.” When asked what keeps him continuously coming back, John smiled and replied, “the people that I work with – staff, students and other volunteers – and its connection to the university, too. It provides a continuity between the past, the present and the future.” He added light-heartedly, “and I just really like the university.”