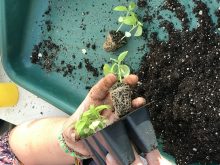 (UFMG) is to promote friendship among members and render service to the UF Health Science Center. The UFMG, which was originally formed in 1959, has donated over one million dollars in scholarships, grants and other projects over the past fifty years with money raised through the volunteer efforts of its members.

Since its inception, the Therapeutic Horticulture Program at Wilmot Gardens has served a variety of vulnerable populations with special needs. Customized programs have been developed to provide treatment for individuals with cancer, depression, spinal cord injury or disease, Parkinson disease and stroke, as well as for veterans and those receiving hemodialysis. Recently, the programming has expanded to include individuals with autism spectrum disorder and those with alcohol and drug addiction. In addition to educating these individuals about various horticultural techniques, the program promotes several therapeutic benefits, including socialization, intellectual and sensory stimulation, respite and relaxation, stress reduction, increased confidence, improvement in coping skills and restoration from mental fatigue.

Many participants in the therapeutic horticulture program are from low income families or may have large medical expenses and Wilmot Gardens strives to offer programming free of charge to those requiring financial assistance. Funding for individual programs comes piecemeal from private donations, grants and research funding. Many participants eventually must leave their respective program after a prescribed period of time due to the nature of research protocol or lack of private or grant funding. Although the participants are taught skills so they can continue to work with plants at home, many find it to be a very difficult transition when their program is terminated, especially when the program has proved beneficial to their well-being and quality of life. One of the most significant aspects of the sessions is the opportunity for social interaction and support, which is no longer present after conclusion of the programs.

“I am so glad to now be able to offer additional programming to those whose programs ended. It was really hard to say goodbye to those folks, especially when you could see the program was so important to them. I am thankful that the Medical Guild recognized that too,” said Leah Diehl. With the support from the UFMG, the alumni participants will be able to meet once per week for 12 weeks in both the spring and fall semesters of 2017. Each session will be 60 minutes long and consist of group horticulture activities. Similar to the regular programming, sessions will be run by a registered horticultural therapist who will be supported by specially-trained volunteers, many of whom are master gardeners. The alumni group will blend participants from various groups for the first time.