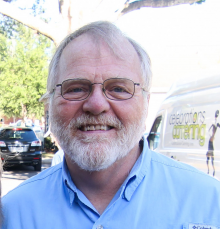 After retiring from 22 years of service in the United States Navy, John Brunner settled in Gainesville where he attended the University of Florida as a Post Graduate student in the College of Education. Brunner’s experiences in the Navy taught him the importance of being part of a community and he quickly became active in his new locale. Since retirement, he has served as a Guardian ad Litem, a mentor in the Take Stock in Children program, and as a board member of the American Cancer Society. Brunner has been an active member of the Rotary Club of Gainesville and since joining in 1999 has served in various capacities, including President and District Governor. Brunner is also a former chair of the Alachua County Office of Equal Opportunity and Fair Housing Board and was chair of the Alachua County Planning Commission. As part of his continued pursuit of community involvement and love of the outdoors, Brunner decided to join the Florida Master Gardener program in 2013.

Brunner was first introduced to Wilmot Gardens at an event focused on connecting budding master gardeners with local service sites. Brunner decided to complete a portion of his volunteer requirements working in the garden and has remained an active part of the Wilmot Gardens’ community ever since. These days, Brunner volunteers primarily in the therapeutic horticulture program and has worked with several different participant groups, including those with cancer, depression, and young adults with Autism. This semester he worked largely with a group of young adults from Shands Florida Recovery Center that are undergoing treatment for substance or alcohol addictions. Brunner feels that the program offers participants positive mental and social aspects as much or more than physical aspects. “Part of therapeutic horticulture is the interaction of playing with the dirt and soil, cutting things, and communicating with those around you,” said Brunner. “When you make something you can look at it and say I did that. It’s a sense of accomplishment.”

Brunner spends his spare time working on projects at home. Although he would never admit to it, he is a skilled woodworker, a hobby he has enjoyed since his youth. In some capacity, he serves as the resident handy man for the Greenhouse at Wilmot Gardens.  In fact, if you have been to any of the recent plant sales at the gardens, it is likely you have seen some of his work. Most recently, he donated several handmade decorative wooden planters that sold out quickly at the spring sale.

Brunner’s dedication to not only Wilmot Gardens, but also the Gainesville community as a whole, is palpable. His hope for the future of Wilmot Gardens is that more people will partake in the therapeutic horticulture program so that he can help share with others “how peaceful it can be to play in the dirt.”