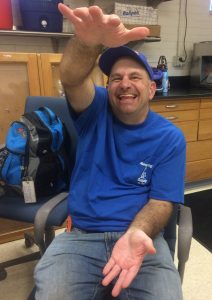 Since joining Wilmot Gardens as a regular volunteer in May of 2016, John Bean has dedicated over 1,000 hours to the improvement and maintenance of the gardens. John now spends five hours, three days a week assisting gardener Steve Pritchett with tasks such as weeding, clean-up, mulching and more. “John works harder than a lot of our younger volunteers. He can even leave me in the dust sometimes. I love having him here working in the gardens. He’s always got a smile on and a great attitude,” said Pritchett.

Earlier this year, as part of the Earn-a-Brick volunteer program for Wilmot Gardens’ volunteers, John was honored with a brick featuring his name in the sidewalk of the gardens. John takes pride in being a part of the Gator nation and of his contributions to the gardens. “I like to work in the gardens because it is a peaceful place,” Bean said.

John’s passion for groundskeeping and plant care began over 45 years ago. Born in 1966, John is a Gainesville native and younger brother to three sisters. At age three, John was diagnosed with brain damage, resulting in intellectual delays and difficulties with coordination, yet this diagnosis has never prevented John from pursuing his passions in life. John initially became interested in groundskeeping as a teenager in northwest Gainesville, where he provided lawn care maintenance services for his own family and several neighbors. In fact, he continued to service many properties in his childhood neighborhood until 2013, at which time he relocated following the untimely passing of his mother.

John received his K-12 education at P.K. Yonge laboratory school and, following high school, enrolled in the Loften High School landscape and plant nursery adult training program for people with disabilities. For over 26 years, he spent his weekdays at the Loften program cultivating his knowledge and passion for plants. In 2016, the program came to an end and John began to seek employment. It was at that time that he learned of the volunteer opportunities at Wilmot Gardens. “If he had not found Wilmot Gardens he would have been otherwise floundering around and not been able to spend time in the field that is his passion. To be able to be on the university campus has been such a huge privilege for him – he loves that,” said his sister, Sandra Windischmann.

When not at Wilmot Gardens, John works part-time at a local tree farm and spends his free time with family and friends, enjoying many hobbies and pastimes. John is a diehard Gator fan and especially enjoys following the football and volleyball teams; however, when asked his favorite thing about being a Gator, John replied without hesitation, “the Dazzlers.”  Some of his other hobbies include treasure hunting at garage sales, listening to rock and roll, watching movies, telling jokes, travelling and learning about Florida history. “John has had a great life maximizing his potential and staying active in the community,” says Windischmann. In fact, if you ask anyone who knows John, all would agree that he has a great sense of humor and is always eager to find common ground and share a laugh. ”John truly embodies the spirit of Wilmot Gardens,” said Bailey Hillman, business manager at Wilmot Gardens, “his level of dedication is reflected in the gardens and we love having him as a part of our community.”

Click here to return to the Wilmot Gardens’ Newsletter